Update: Ratified Agreement For The Chicago Lyric Opera On Strike 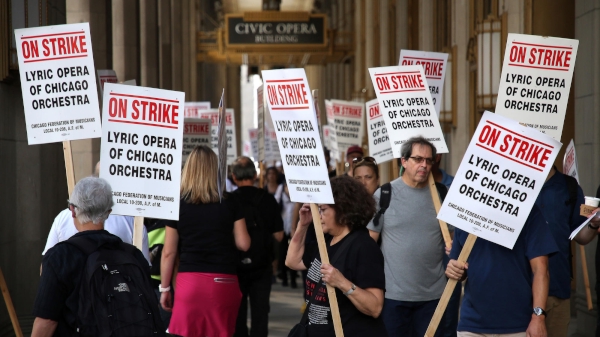 Posted Date: October 12 2018
Update: Ratified Agreement For The Chicago Lyric Opera On Strike
October 12, 2018
UPDATE: The Lyric Opera of Chicago and the Musicians Union Local 10-208 representing its orchestra musicians have reached a contract agreement, just days after the musicians went on strike. The musicians ratified the deal Sunday evening, according to a statement.
In a tweet late Saturday, the Lyric Opera said that they and the Chicago Federation of Musicians Local #10-208 had reached a labor agreement that extended through the 2020/2021 season.

They add that the “concessions are mitigated by more favorable terms we were able to obtain.”

— A 5.6 percent increase in weekly salary over the 3-year contract term.

— The 2019-20 season now includes a guarantee of five (5) additional weeks for the “Ring” cycle, outside of the 22-week main opera season.
— The orchestra size will be reduced by four instead of five musicians, delayed until the 2019-20 season.
— The Spring musical is now guaranteed to employ 37 members of the Orchestra, and the salary for the musicals increases significantly (by 6.6%).
— There are new guarantees regarding the hiring of Orchestra musicians for Joffrey Ballet productions beginning in 2020.
— Health care benefits are maintained as is; family leave is now 8 paid weeks; and there are numerous other improvements in working conditions.


In response to management’s demands for radical cuts, the Lyric Opera of Chicago musicians went on strike today. Opera management wants to eliminate five musicians from the orchestra, slash musicians’ pay by 8%, reduce the length of the season, and end the opera’s radio broadcasts.

Musicians are fighting to maintain the number of orchestra musicians, for cost of living increases, and to preserve benefits and working conditions. The musicians’ last proposal to management tied wage increases directly to the rate of inflation. This is in stark contrast to Anthony Freud, the opera’s general director, who has seen his compensation rise 18% from 2014 to 2017. Freud received a 16% raise in 2016—right after musicians agreed to a cost-neutral contract with cuts to their health care.

Freud is now leading the charge to gut the orchestra. Management’s proposed salary cuts would cost each musician $6,000; Freud, with his $800,000 annual salary, gets paid that much every three days.

Over the past 65 years, Chicago’s citizens, civic leaders, and philanthropists built a world-class opera company for a world-class city. The Lyric Opera of Chicago musicians are a key part of that success, but management’s cuts would decimate the orchestra and forever diminish the opera.

Chicago musicians are on strike because they will not, and cannot, accept a Lyric Opera of Chicago that is nothing but a pale shadow of its former self. If Anthony Freud and his crew abdicate their responsibility as the stewards of this organization, then the musicians will gladly take up that cause.